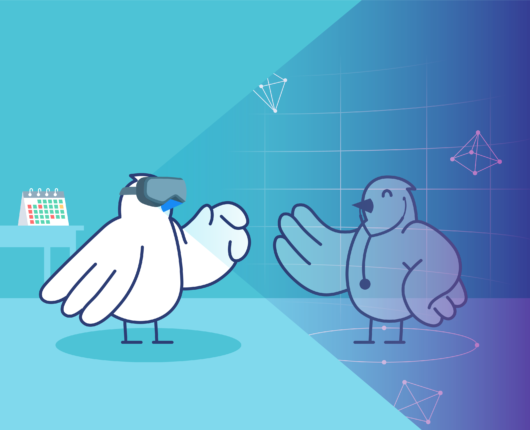 Since its surprise announcement late last year, the metaverse has left tech enthusiasts speculating how the new virtual reality frontier will impact their daily lives. There will undoubtedly be radical innovations, but Meta’s plan to transform the healthcare industry might surprise even the most committed futurists.

The global health pandemic caused a radical shift in the way people interact with their doctors. Once considered a gimmick, telehealth has exploded onto the medical scene and experienced a 38x growth compared to pre-pandemic levels.

That’s a trend where Meta sees opportunity. Wouldn’t it be great if you could interact directly with your doctor from anywhere? Skeptics may scoff at the idea, but augmented reality has already found a home in the world of surgery. As far as Meta sees it, meeting your doctor in virtual reality is a natural evolution of this phenomenon.

Why would anyone book a doctor’s appointment in VR? We spoke with Josh James, founder of VR ad agency RocketNow to learn more:

“Virtual scheduling in the metaverse is already here. You can create touch points in shared 3d worlds (think: virtual billboards on the side of a virtual road) with ad campaigns that are interactive, engaging, and fun for your audience. We will soon be able to display ads with a “book now”  button that you can click with your hand-held controllers. It’s a revolutionary new way to advertise in web3, and it’s time for your business to join the revolution.”

As the platform grows in popularity, Meta’s existing browser ads will begin to extend into virtual space. The Verge reported Meta’s user count had hit 300,000 as of February 2020. That’s 10x more users than just three months prior. Small businesses, from salons to doctors, will soon be receiving appointment bookings in the metaverse.

The COVID-19 Pandemic saw the healthcare industry become wholly upended. A new, rapidly-spreading virus saw the doctors we took for granted rapidly become precious resources amidst overloaded hospitals and buckling health infrastructure. Even with the help of response workers, volunteers, and even the military in many places, the coronavirus brought first-rate health systems to their knees.

It was wartime, and the common struggle forced everyone from startup small businesses to big tech giants to come together and innovate for the good of us all. In particular, the world saw an exponential growth of telehealthcare: the use of digital mediums to provide healthcare remotely.

During the outbreak, providers swiftly adopted telehealth as the primary method for protecting patients and doctors alike from infection. The transition made many providers ask new questions, pondering what real-world procedures could be moved entirely online or over the phone.

As it turns out, quite a lot of them. For instance, patients could complete tasks such as scheduling appointments, requesting refills, and even uploading blood sugar telemetry for nurse evaluations. Appointment-reminder calls became text notifications, trips to the pharmacy became taps of the screen, and risky visits to the doctor became phone conversations.

It’s just the beginning for Meta, Microsoft, and the rest of the tech giants.

Prepping for Surgery in VR

That innovation applies to patients as well, who can have their surgeries explained to them in VR. For example, at the JFK University Medical Center Neuroscience Institute, doctors are leveraging the power of VR to create 360-degree reconstructions of patients’ brains. Patients and doctors can then don headsets and take a cooperative 3D tour of the surgery site. A Virtual World of Possibilities

According to Mark Zuckerberg, the metaverse is, at its core, “a virtual environment where you can be present with people in digital spaces.” Facebook started as The Social Network, and now with its transition to Meta, it wants to become The Everything Network. Not only will you be able to see your friends and family from anywhere, but also your peers, coworkers, therapists, and, yes, your doctors.

The medical community has already leveraged the incredible power of VR and AR, and Meta seeks to build on that. In addition to improving efficiency, virtual reality democratizes healthcare for underprivileged populations. As a result, the best healthcare will be available instantly to anyone, regardless of restrictions.

Consider a rural farmer living in a developing region with limited transportation options. Their livelihood relies on them being active every day, but they have a backache that won’t subside. It may have been just a matter of living with it and hoping for the best in days gone by.

However, such is not the case in near-future society. Instead, the farmer uses appointment scheduling software on their iPhone or Android device to meet with a world-class healthcare provider in the metaverse. They then don their headset and meet their doctor in avatar form.

They can describe their symptoms, possibly in conjunction with uploaded health data, and receive an evaluation for further treatment — all without leaving home. If they want to review the session later, they could record it for playback on command. They could even pay for any fees over the blockchain.

Monetize and Gamify Your Health Data

Famous entrepreneur Jane Thomason recently published an article in the Journal of Metaverse outlining some incredible possibilities for how metacitizens may be able to use their health data in the future.

For instance, users may receive compensation in exchange for “move-to-earn” programs directed at improving wellness. Users may earn these rewards passively during their everyday lifestyle or while participating in smart workouts with direction from virtual instructors.

These sorts of programs will play into a more significant paradigm shift in the healthcare industry where people can better control their data and utilize it more effectively for their well-being. Thomason notes that non-fungible tokens (NFTs) will likely play a significant role in this new data exchange.

This wave of innovation isn’t just limited to strict medical applications — your therapist is fair game for metaversification, too. Soon, making and keeping therapy appointments in VR may become the norm for millions of people.

In the public’s current mindset, many doubt that strapping a screen to their head would make an appreciable difference to their mental health. However, new startups on the cutting edge of innovation would beg to disagree. Soon, you may be taking mental health advice from an artificial intelligence.

Enter Sensorium, an incredibly ambitious project aimed at creating the most advanced digital metaverse yet. Sensorium will feature thousands of AI citizens to guide you through the new world and provide emotional support when need be.

Tech-writer Ruth Reader previewed this upcoming metaverse and interviewed Sensorium’s head of product, Ivan Nikitin. He explained that “the virtual characters are your emotional support companions, they are your own digital confidents [sic] with whom you can share your ideas and feelings, and they are available 24/7 for you.”

Therapy Appointments in the Metaverse

If talking to a robot about your issues isn’t your cup of tea, startups like XRhealth are giving patients the means to make online appointments with licensed therapists and work with them directly through VR. XRhealth makes starting simple with a three-step onboarding scheme: choose your therapist, receive your VR kit, and begin your journey with your first fully-online session using virtual reality therapy software.

Consider a further example in Austin-based startup Rey. They’re offering those suffering from social anxiety the chance to “rewire the circuitry that can cause crippling anxiety” from the safety of a simulated environment. Patients can navigate real-world scenarios — such as cafes or doctors’ offices — all with the help of a human coach. 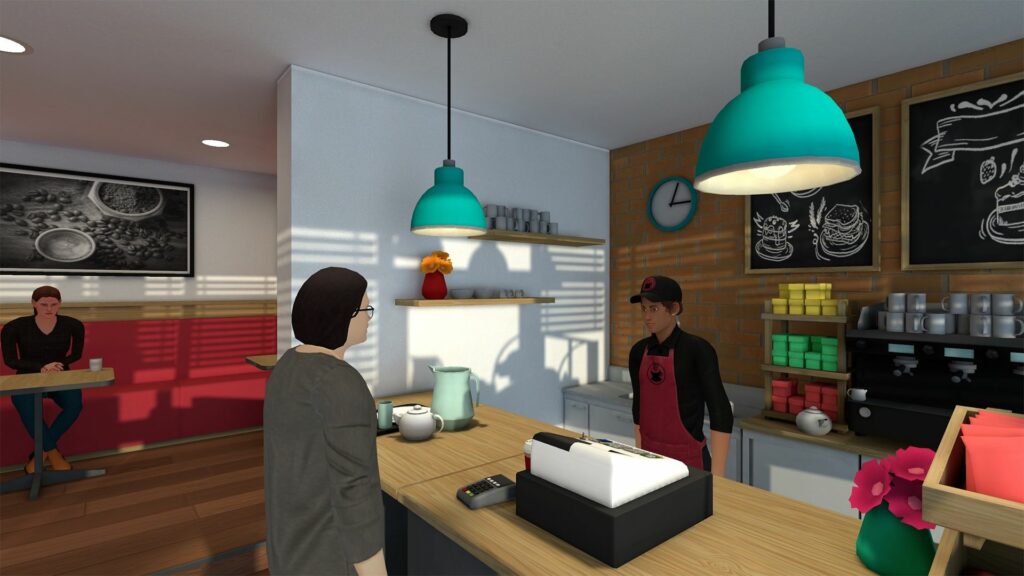 If you think virtual therapy is inferior to traditional treatment, Oxford University psychologist Daniel Freeman says otherwise. In a peer-reviewed study, he found that patients treated with VR therapy experienced a 38% decrease in symptoms of anxiety over six weeks. Virtual reality therapy for PTSD has also yielded tremendous results, primarily due to its potent applications in exposure therapy.

In discussing the transformative effects of the metaverse on different industries, the greater implications become more evident across other spaces — including the broader workplace. It goes without saying that COVID-19 has completely reshaped the way we work.

As companies adapted quickly to protect employees from a contagious virus, almost half of US workers worked online.

Before 2020, “remote work” was considered an oddity that few people had experience with. These days, it’s something many employees are demanding in their contracts. While some companies resent their employees’ new tastes, companies like Meta and Microsoft are busy blurring the lines between on and off-site work with new VR apps.

Last year, Microsoft founder Bill Gates predicted that the metaverse will host most virtual business meetings “within the next two to three years.” He said the effects of the pandemic on the work environment would only intensify in the future and that remote working will continue to expand.

Instead of the 2D Zoom meetings that currently define the remote working experience, employees will don their headsets to meet their coworkers’ avatars in the 3D environment of the metaverse. These virtual reality meetings will make the remote experience more personable and enjoyable.

Meta excluded, the metaverse will be hard-pressed to find a bigger fan than Microsoft — which is ecstatic to integrate the virtual world into how they live, work, and play. As hinted at before with some of their HoloLens innovations, Microsoft is no slacker in the virtual reality space and sees itself as one of the leading innovators in expanding the metaverse.

Imagine you need to schedule a meeting with your colleagues amidst your busy schedule in the future. Using Microsoft’s AI-powered scheduling assistant, you’ll be able to easily find a time to speak to your colleges even across international time schedules and busy agendas. Then, when the time comes, you equip your VR headset of choice to collaborate with your colleagues as if they were in the room with you.

In a recent LinkedIn post, Microsoft CEO Satya Nadella expressed his excitement in “transforming how we see the world [and] how we participate in it – from the factory floor to the meeting room.” In particular, Nadella touted Microsoft Mesh as the fulcrum of the transformation of the workplace. As Microsoft sees it, Mesh will enable users to blur the lines between “here” and “there” and create authentic and personable collaboration at any distance. 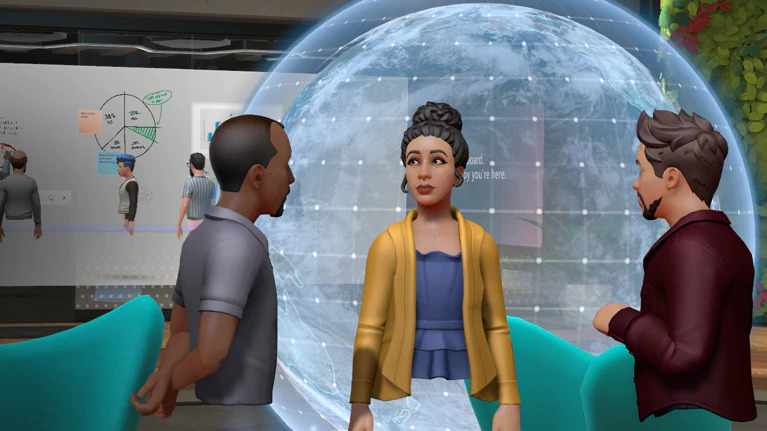 The response was mixed. While some users were excited about potential changes to the way they did business, skepticism and concern were abundant. Some even vowed to resist the metaverse at every integration.

While quietly acknowledging the skepticism, those in the pro-metaverse camp are optimistic that a gradual change in sentiment is in the cards. For example, Meta CEO Mark Zuckerberg gives a conservative estimate of five to ten years before aspects of the metaverse begin to become mainstream.

There is no single firm that will create the metaverse. Instead, it will come about as a result of the work of many developers. In the words of Zuckerberg himself, “no one company” will construct this new digital frontier. Out of the diversity of this collaboration will come a single network designed to change everything about the way we live our lives.

As ominous as that may sound to many, metaverse entrepreneurs dismiss that skepticism as the usual phenomenon of naysayers that accompany every new wave of innovation. While that response may sound presumptuous, the world cannot deny the possibilities hinted at by existing innovation. Samuel Szuchan is the founder of SamSzu.com, where entrepreneurs are learning to scale their businesses like never before. His experience in the emerging tech industry derives from his previous business ventures and his current entrepreneurial pursuits. When he’s not teaching online business to others, you’ll find him entranced in one of his many hobbies. The #1 online tool for scheduling meetings